How Do the Mothers of Addicts Recover?

From October 11 to 28, the Theater for the New City in New York City will present the world premiere of Recovery, my new play exploring the relationships of three sets of mothers and daughters as the daughters struggle to overcome addiction. (Tickets at www.theaterforthenewcity.net) This is a play I had to write, the reason I became a playwright in the first place. It grew from my own experiences with a daughter struggling with addiction to heroin, but since then it has become a touchstone for a much larger community of people affected by addiction. My daughter and I will do a talk back after the play on October 27th.

One of the things that handicapped me as the mother of a drug addict and alcoholic was that our society sees addiction as a moral failing. Because of the shame I felt, I would keep silent around my friends and family, whereas if my daughter had heart disease or cancer, I would be asking for help, telling my family, my friends, and my neighbors. It is past time for those of us touched by addiction to fight to end the shame, to get our society to understand that addiction is a disease, not a failure of will or morality.

The subtitle of the play is “How do the mothers of addicts recover?” No one understands the depth of despair and anxiety you feel when your child is caught in addiction. Fear takes over your life, and parents worry themselves to the point of mental illness because they know this is a disease that will end in death unless it is treated. When you have a loved one in the grip of addiction, you become obsessed. You are in a war zone, but the war and the enemy are both inside your child.

I’ve met parents who have gone bankrupt trying to save their children. One man had been sending his daughter to rehab since she was 16. She was now 24, and he had sold everything and was now living on a boat in Salem Harbor. I’ve been in rooms where parents were sobbing, saying they’re taking the furniture today because we must have the $35,000 to keep our son in rehab. Parents make it their life’s quest to save their kids; even though their “children” are now 50 and they themselves are in their 70s, they keep pouring money out in the hope of keeping their child alive. To me, this qualifies as mental illness, a form of PTSD.

I realize I am one of the lucky ones, as my daughter has been in recovery for nine years. She is invested in doing the work it takes to live a joyful life in recovery.

One thing that helped both my daughter and me is that I embraced my part of the program. I haven’t been sitting on the sidelines, saying this is her disease, her problem. I learned at Caron that this is a family disease, and the counselors there made it very clear to me that I needed to go to AlAnon, a support group for those whose loved ones are suffering from addiction.

Like many parents, I went to AlAnon thinking they were going to teach me how to save my child, but that’s not what AlAnon teaches. Instead, it’s about how to save yourself. How do you continue to function as a happy, healthy, successful human being, whether your child continues in addiction or even dies? And that’s a very hard thing for mothers, because I think women are hard-wired to sacrifice themselves for their children. The tough thing about addiction is that the many, many sacrifices that you make as a mother can only go so far, because recovery is in the hands of the person with the illness.

That’s what drove me to write this play, to help people understand the anguish that mothers feel, and to offer a sense of healing to those of us who are going through this heartache. It helps to know that you are not alone, that others are with you, and that your cries are being heard.

The play is set up with three sets of mothers and daughters, and they’re all from different socioeconomic levels, to tell a broader story. All these mothers and their daughters are meeting at a rehab facility I called The Mountain. Outside of the interplay between these mothers and daughters, there’s also an epic battle between the Demon -- the only man in the cast and the embodiment of all temptation and substance use -- and the Reverend -- the spiritual director of the rehab facility. There is a game the two continually play for the souls of these people.

The Demon is funny in a dark way, which I think helps the audience because it’s such a tough subject. And the Reverend is a woman who is in recovery herself, for 25 years, and her mission is to help girls who are suffering. I created this framework of a battle between the Reverend and the Demon so that the play could speak more globally about addiction itself, and how it is a battle that is eternal. What really ends the battle is love: The person struggling with addiction must learn to love themselves enough to engage in the fight.

We’ve done readings of the play as we develop the script, and it’s very moving for me when people come up to me afterwards, crying, and thank me for helping them understand things so differently. Nobody ever really talks about what happens with the parents of an addict. The therapists in the audiences tell me the play is a powerful representation about what parents go through, and they feel the play could be a tool for a broader population to understand this disease.

To me, this play is an opportunity for me to be in alignment with my higher purpose. All that I went through – and it was a horrible, frightening, dark time – all that suffering I have gone through will have a purpose if I’m able to reach and perhaps awaken people to the impact of this disease. I spent six months writing the original script, and I cried every day while I was writing it.

I have even opened the eyes of the play’s director, who as a native New Yorker thought addiction was a disease of the streets. Instead, he now understands that addiction is an equal opportunity disease that affects everyone. He’s been shocked to learn that this is happening in nice neighborhoods, to kids with good educations.

He’s probably not the only one who doesn’t understand that addiction touches everyone. My daughter is a child of the suburbs, and, for a girl who’s turning 30, she has had more people in her life die already than many elderly people do. That’s a reality she lives in.

Again, the name of the play is Recovery, and the subtitle is How do the mothers of addicts recover? I invite you to come to a performance. I have worked up an illustration for the program, posters, and other materials. In the image is a tree, because at Caron there’s a tree where parents come to scatter the ashes of children who don’t make it. One of the most moving experiences of my life was being at Caron and having a parent stand in the front of chapel and talk about their son and how they’d brought his ashes today. Their message to all of us in the Chapel that day was simply, “Listen to the people here at Caron, they know. Don’t think you’re smarter than this disease.” 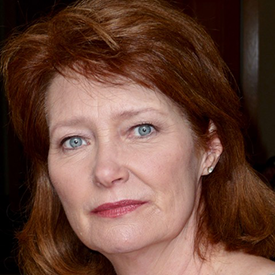 Playwright, and mother of a daughter in recovery.

Addiction is a Family Disease